Consistent with recent posts, this dish was inspired by my latest CSA share – particularly, the cabbage. and more specifically, the Late Flat Dutch cabbage. I rarely buy cabbage, so I was at somewhat of a loss as to what I should do with it. Then, I remembered my mom making stuffed cabbage once upon a time and loving it. Problem solved. However, having no idea where to start, I read through countless recipes until I crafted one of my own.

Ironically enough, it wasn’t until I was eating my stuffed cabbage that I learned the origin of this dish. On two separate occasions, a roommate and a coworker questioned what I was eating. When I replied, “stuffed cabbage,” they replied, “halupki?!” Uh, maybe? As it turns out, yes. Halupki is the traditional word for stuffed cabbage, which is a traditional Polish dish. I always joke that I’m a grandma; now, we’ll stick to babushka, thankyouverymuch.

Anyway, in the middle of cooking, I was so nervous that I was burning the sauce, yet I had to allow for ample cooking time to ensure that the meat and rice were cooked through. Luckily, I kicked my nerves to the curb and cooked the dish as planned. After tasting the sauce, I realized that the sauce had caramelized instead of burned. The result was a nutty, mildly sweet flavor that complimented the bitterness of the cabbage and the savoriness of the meat so well. This, ladies and gents, is why I love experimental cooking. Rest assured, the meat and rice were cooked perfectly, too.

I must say, this dish was super yummy. Anyone who knows me well knows how much I hate leftovers, so the fact that I ate stuffed cabbage for lunch four days in a row certainly says something. While stuffed cabbage is traditionally served with mashed potatoes, I did without them. To me, two cabbage rolls were extremely fulfilling on their own. 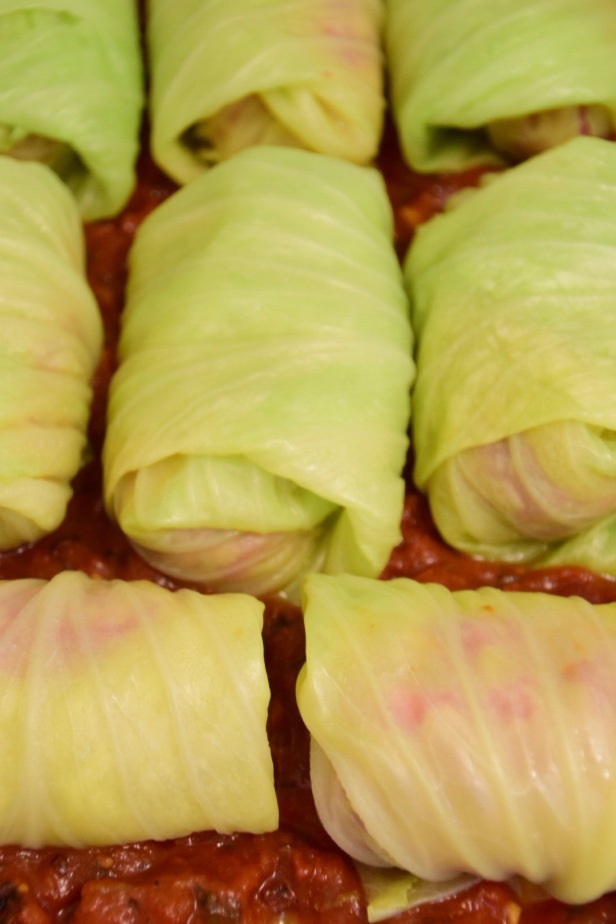 One thought on “Stuffed Cabbage with Fire-Roasted Tomato Sauce”