Hey, friends! Long time, no blog post. In September, I started my clinical year of grad school and my blog ended up on the back burner. However, if I’m going to take the time to blog about anything, it’s most definitely going to be about my travels.

During winter break, my friend Amanda (who is also in grad school), decided to visit our friend Danielle in Sevilla. Those two were my first roomies in Philly, so it was incredible to have the trio back together. Needless to say, Amanda and I were burnt out after a semester of doing the whole working-while-in-clinical thing, so it was beyond amazing to have Danielle as our personal guide. At the time that we visited in December, Danielle had been living there for about nine months. She knows the city extremely well and blew me away by how quickly she’s become conversational in Spanish. Unfortunately, several years of high school and college Spanish did not come back to me in the way I’d hoped. Dang.

Our trip began by finishing up finals and hopping on a red eye. That’s kind of an exaggeration, but not really. Our trip was eight days in total, but required three solid days of travel, so please keep that in mind if you’re planning a similar trip! To get to Sevilla, it’s most economical to fly into either Barcelona or Madrid and then take a domestic flight to Seville. Because Amanda and I wanted to spend a couple of days in the city that we flew into, we decided on Barcelona. But more on that later.

Out of everyone I’ve known who has lived in or traveled to Sevilla, I’ve never heard a negative thing about it. Let’s just say that those sentiments are justified. In short, it’s the quaint capitol city of southern Spain’s Andalusia region, and it’s full of history, lovely people, and citrus trees. It’s also extremely walkable, making just about everything accessible by foot. Lucky for us, Danielle’s apartment is located in Sevilla’s Santa Cruz neighborhood, also recognized as the old Jewish quarter. Because it’s in the city center and home to popular sites like Catedral de Sevilla and Real Alcazár, I can’t imagine having stayed anywhere else. As an added bonus, its picturesque, narrow streets and alleyways are exactly what you’d expect from a medieval city.

We were extremely jet-lagged, so we slept in and moseyed our way over to a super cute coffee joint called Almazen Café. This place is home of one of the best dirty chais I’ve ever had! So, if dirty chais are your caffeinated beverage of choice, swinging by here is a must.

After gaining some much-needed energy, we headed to Catedral de Sevilla. As a UNESCO World Heritage Site and the third-largest cathedral in the world, it is undoubtedly worth seeing. Its gothic architecture is exquisite, boasting 15 doors in total. The Door of Conception, opening to The Court of Oranges, is my favorite. If time allows, climb La Giralda bell tower for magnificent city views.

By this time, we worked up an appetite, so we decided to grab some grub at Bodeguita Antonio Romero Origen. This was our first time indulging in delicious tapas, but it certainly wasn’t our last. This place is definitely worth checking out, as the crowd was lively and the cava (essentially, Spanish champagne) was flowing.

Since we were nearby, we made a pit stop at Plaza de Toros de la Real Maestranza de Caballería de Sevilla. Seville’s infamous bullring is the oldest in Spain and one of the most famous in the world. While you couldn’t pay me to watch a bullfight (I’m all about embracing the culture while traveling, but I’ve gotta draw the line somewhere), this building plays a significant role in Sevilla’s history and is at the very least worth swinging by for some photos.

Afterward, we briefly walked along Canal de Alfonso XIII, one of the arms of Rio Guadalquivir. We soon found ourselves at Mercado Lonja del Barranco, enjoying another bottle of cava. This stunning market houses 20 gourmet food and beverage stands, allowing visitors to sample whatever their hearts desire.

Danielle joined a language exchange group when she first moved to Sevilla, and its members hosted a holiday dinner that they were gracious enough to invite us to. As such, we ended our first day in Sevilla with an absolutely delicious dinner at Lobo López. I love, love, loved its vibe and décor! It was awesome getting to know Danielle’s new friends – some Sevilla natives and others from various European countries. 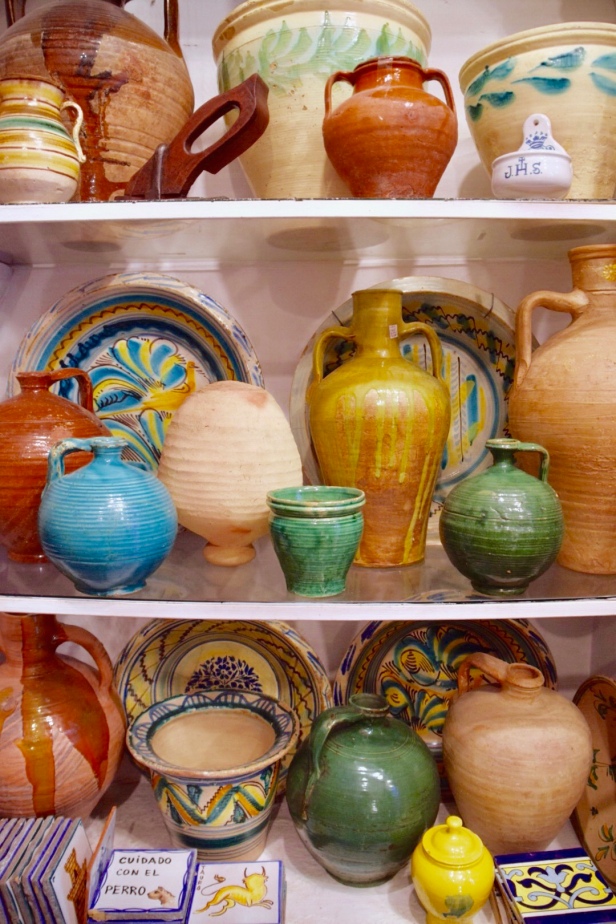 We had a little too much fun after dinner the night prior, so we slept a little later than we had anticipated. Whoops. After finally dragging ourselves out of bed, we started our day off with some tapas and sangria at La Bartola. Hair of the dog, my friends! Oh, and shout out to the jolly group of men who sat at the table next to us and gave us the cutest Santa pins.

After filling our bellies and catching a buzz, we attempted to visit Casa de Pilatos for a tour. Unfortunately, we arrived just prior to closing time. According to Danielle, while certainly beautiful, the palace isn’t a “must see” while in Sevilla, so we weren’t overly disappointed. However, with that being said, I think it’s important to note that many places in Sevilla have limited hours or are closed all together on Sundays. Knowing that, be sure to plan accordingly!

We later headed toward Triana, a vibrant neighborhood just over the water. An adorable café, Bravo Café y Copas, caught our eye, so we decided to post up and sip on some espresso. If nothing else, go for its insanely cool plant walls.

Eventually, we worked our way back towards Danielle’s apartment to catch a flamenco performance at La Carbonería. It’s a no-frills establishment that allows the performance itself to shine. Call me the tourist of all tourists, but I absolutely loved this experience! The passion, emotion, and talent exhibited by each and every performer blew me away. And the icing on the cake?!? Admission is absolutely free.

We ended our leisurely day with an incredible vegan dinner at Bar Alfalfa. While the restaurant offers tapas for herbivores and carnivores alike, Danielle sticks to a plant-based diet. Let’s just say that after all the meat and cheese that Amanda and I had been consuming for two days straight, we were happy to devour some veggies with her.

Knowing this was our last full day in Sevilla, we hit the ground running. We grabbed a quick breakfast near Danielle’s apartment and were on our way. Our day started at Plaza de España, located in Parque de María Luisa. Built for the Spanish-American Exhibition of 1929, the plaza and the massive building that sits upon it are gorgeous and loaded with history. Plaza de España encompasses four bridges, representing the four ancient kingdoms of Spain, as well as uniquely tiled alcoves, representing the 49 provinces of Spain. Each alcove has a built-in bench and a pair of covered bookshelves, said to encourage a “free library.” Love!

Next, we headed to Real Alcázar. As a UNESCO World Heritage Site and the oldest royal palace still in use in Europe, visiting is an absolute must! Originally the site of a Muslim fortress, Alcázar was built after the Christian conquest of Sevilla, making it a magnificent marriage of Mudéjar and Christian architecture. The palace’s history dates back to 913, meaning that it’s over 11 centuries old! Aside from its awe-inspiring history, its distinctive architecture and pristine gardens make it easy to explore for hours. Fun fact: several episodes from the fifth season of Game of Thrones were filmed here. In the show, Alcázar represents the Water Gardens of Dorne, private estate of the House of Martell and the southernmost of the Seven Kingdoms.

After hours of doing some serious sightseeing, we were ready for lunch. Danielle suggested Uno de Delicias for her favorite tortilla (Spanish omelette) in all of Sevilla. Delish! Of course, our meal was accompanied by a couple bottles of cava. Directly across the street from the restaurant is Torre del Oro, a defensive tower that once protected Sevilla from invasion. Although I don’t consider the tower a “must see,” we popped in and out since we were close by and admission happened to be free that day (Monday).

We then took a stroll over Puente de Isabel II, more commonly known as Puente de Triana. Just over the bridge is a waterfront restaurant and bar called Mariatrifulca. We headed straight to its rooftop just in time for sunset and enjoyed a couple bottles of – you guessed it – cava. I can’t recommend doing this enough!

Believe it or not, we were ready for dinner by the time we were finished at Mariatrifulca. Little did Amanda and I know that Danielle was about to indulge us in our best culinary experience yet. How fitting for our last night! Contenedor is off the beaten path, but so worth venturing to. The service was impeccable and the menu was to die for. Think slow-cooked goodness prepared with some of the freshest regional ingredients you can imagine.

We ended a perfect day by having a drink at the most eccentric bar I’ve ever been to, El Garlochi. Strewn with enough religious paraphernalia to make your head spin, it’s tough to determine whether its owners are sacrilegious heathens or devout Catholics. Although I generally don’t indulge in sickeningly sweet beverages, I went for the house drink, Sangre de Cristo (Blood of Christ), made with whiskey, cava, and grenadine. So, if you’re looking for an unconventional drinking experience, look no further than this quirky establishment.

Before we knew it, we were off to bed, bringing our short, but sweet stay in Sevilla to a close. Thank you again to our girl Danielle for making our stay in Sevilla so special! Love you and Minnie girl so much. =)

🍤 on the barbie...live for days like today #grillinandchillin #sundayfunday
Happy birthday to my lovebug! Having you on my quaranteam and celebrating so many milestones with you over the past year has been such a blessing. Love love love you! 💚🍀
Excuse me while I quench my thirst 🌞
B🍄L🥬A🥑T🍅 wrap with portobello “bacon”
2020 is weird and not seeing your extended family over the holiday season stinks. Since I’ve always been drawn to the Feast of the Seven Fishes tradition, I figured this year of all years was the one to make my quirky lil version happen. Plus chocolate fondue because...YUM. Hope you and yours have found fun ways to make this funky holiday season a little brighter. Merry Christmas to all and to all a good night! 🎄✨❤️
when your mum lets you borrow her bestie for the weekend 🤍🥺 #pippenbear #puppylove
Yesterday didn’t feel real. Today, I feel a sense of tranquility that I haven’t felt in a long time. So proud of the Philadelphians and everyone else who chose unity and progress over chaos and oppression. The work continues, but hope has been restored. 💙🇺🇸 #bidenharris2020 #blacklivesmatter #loveislove #abolishICE #scienceisreal #kindnessmatters
Not having my annual Halloween party on a fall back, full moon Saturday was a real bummer, but laying low with the fam and receiving the sweetest messages from afar was a close second. Here’s to taking care of each other, loving a little harder, and voting that mofo out. ✌🏼🎃👻 #quarantinebirthday
This time last week, Chris and I surprised our mama with a 60th birthday getaway. It wasn’t the big party we initially envisioned, but I think it’s safe to say that it ended up being exactly what she would have wanted all along – wholesome, serene, and remarkably beautiful. It’s no coincidence that these are all words I would use to describe this cute lil lady. I love you, Judy! ❤️ #quarantinebirthday
Loading Comments...
Comment
×
<span>%d</span> bloggers like this: