If you missed the intro to this blog series, be sure to check it out here.

Figuring out how to approach a one-day visit to Grand Canyon National Park can get a little overwhelming, so I’ll try to make it simple. Grand Canyon has three main areas that can be visited by the general public: West Rim, North Rim, and South Rim. West Rim is owned and run by Hualapai Native Americans, whereas North Rim and South Rim are part of Grand Canyon National Park and are therefore run by the National Park Service. Due to its proximity, West Rim is generally the rim of choice for those visiting from Las Vegas, and its Skywalk, rather than trails, is the main attraction.

Because trails are kind of our thing, and because a drive to West Rim was longer than we could justify, we were left to decide between North Rim and South Rim. To start, North Rim has one lodge and no shuttle service, and it’s open from May to October only. This area of Grand Canyon National Park receives only 10% of the park’s visitation. So, if a peaceful experience in a more remote area of the canyon is what you’re after, North Rim is for you. South Rim, on the other hand, receives the remaining 90% of the park’s visitation, largely to its abundance of lodges, hotels, campgrounds, shuttles, trails, overlooks, and restaurants. It is also open year-round. So, if convenience and options are what you’re after, South Rim is for you.

For us, South Rim was the clear winner. Rather than enter the park through the more bustling South Entrance Station, we entered through the less busy East Entrance Station. (There is no “East Rim,” so to speak, so don’t let the name fool you.) From there, we drove west along Desert View Drive and stopped at various overlooks. Note that there isn’t a shuttle service along the majority of Desert View Drive, so driving is the only way to access overlooks and trails within this area of the park. Two of my personal favorite overlooks were Lichpan Point for its views of the Colorado River and Grand View Point for its views of Horseshoe Mesa.

Moreover, towards the end of Desert View Drive is Yaki Point, which is where the trailhead for South Kaibab Trail to Ooh Aah Point is located. You guys, this 1.8-mile, out and back hike is an absolute must! Don’t get me wrong, the views of the canyon from the overlooks are breathtaking, but nothing even closely compared to the feeling of being inside the canyon. I have no idea why, but prior to visiting the Grand Canyon, it hadn’t even dawned on me that hiking to the bottom of the canyon is an option. Shocker: it isn’t recommended to do so in a day. In fact, there are signs all over the park warning against it; it’s simply too time consuming and too strenuous to do safely. However, now that I know that it’s very much an option, and that there is both a campground and a lodge at the bottom, I’ve added a new item to the ol’ bucket list. ;)

Now, maybe it’s just me, but I found the park’s shuttle service to be a little confusing. To lend a helping hand, here’s my simple breakdown of the various shuttle routes offered: Hermit’s Rest (red, runs March 1st to November 30th); Village (blue, runs year-round); Kaibab/Rim (orange, runs year-round); and Tusayan (purple, runs early spring to fall). Perhaps the most important note at all when it comes to the park’s shuttle service?!? The overlooks and trails along Hermit’s Rest Road can be accessed by shuttle only. All other shuttle routes allow vehicles. Of course, utilize the shuttle schedule/map when you’re there, but beforehand, be sure to have a game plan regarding what you want to do and how you’re going to get there.

Anywho, before we hopped onto the Hermit’s Rest shuttle to continue further west, we stopped at the Canyon Village Market for some beverages to enjoy during sunset. We were pleasantly surprised to find a pretty impressive selection of local craft beer. Then, with our brews in tow, we had the shuttle drop us off at Mohave Point. Although this is a popular location for sunset due to its wide vistas and Colorado River views, we got there just in time to snag a solid spot. I must say, while the Grand Canyon is beautiful in photos, absolutely nothing compares to experiencing its vastness firsthand. With that being said, when I was disappointed in my sunset photos of the canyon, I ditched my camera to live in the moment with my girlfriends. That’s a memory that I’ll hold close forever, photo evidence or not. 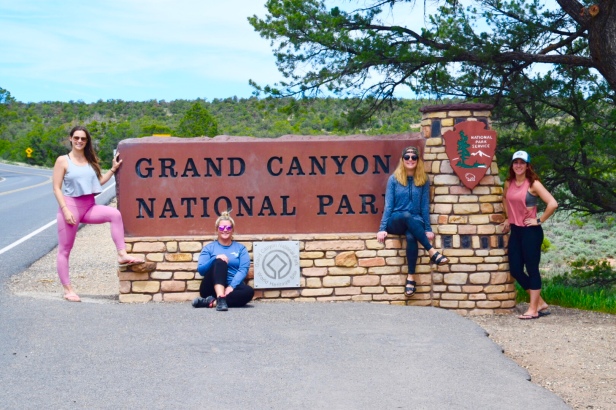 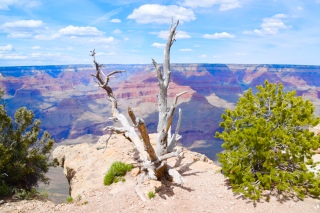 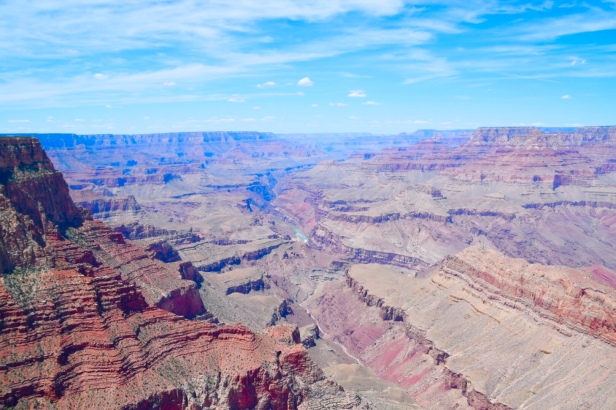 En route to our glamping site, we stopped at Plaza Bonita for some decent Tex Mex and margaritas. Then, we headed to Under Canvas Grand Canyon. If you’ve been reading my blog longterm you are likely well-aware that I’m an Under Canvas fanatic. Prior to this trip, I’d stayed at its Zion and Moab locations and had wonderful experiences. While this location is no different in terms of how lovely it is – from its aesthetics to its friendly staff, I will warn you that, despite a wood-burning stove doing its thing, it was frigid. If you’re going to go the glamping route, I’d be mindful of the nighttime temperatures during the time of year that you’re visiting and plan accordingly depending on the level of cold that you can tolerate. Lots of layers. I repeat: lots of layers. 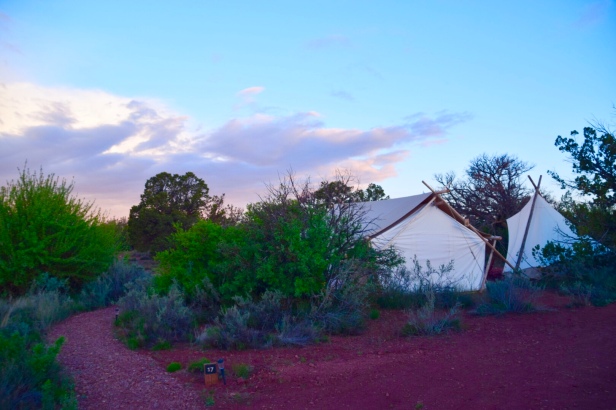